The world’s population is set to float past the nine billion mark by 2050, a consensus of opinion, which raises the inevitable question, ‘how on Earth are we going to feed everyone?’ 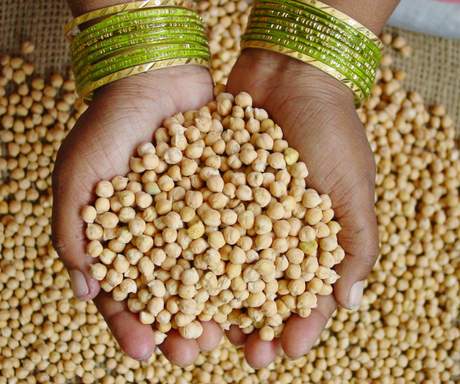 The devil is in the chickpea
Most of the food I buy comes from local sources. It just seems ridiculous to buy pasta flown in from Rumania, and chickpeas shipped from Turkey when there are so many local alternatives here in South Africa. It requires some effort initially to check the small print of each product (especially if you also check for MSG, preservatives, etc.), but soon you recognise the local products. I also pride myself for buying organic when I can and I stay clear of GMOs. But when asked why, I never really had a proper answer ready.

So I decided it was time to learn the truth, and nothing but the truth, about sustainable food. First stop: internet. I emailed my sister, who has been researching Food Democracy in the last few years, and while waiting for her answer, I started browsing for clues. The first thing I found was a TED talk by Jonathan Foley called “the other inconvenient truth”. Bang! Welcome to the global agricultural crisis.

The global agricultural crisis
“The inconvenient truth” was Al Gore´s wake up call to the effects of human induced climate change, which is the area I work in. The “other inconvenient truth” is about agriculture, which I knew little about. The challenges are vast. Agriculture uses up and contaminates our fresh water, is destroying biodiversity, soil fertility and forests, and is one of the main contributors to climate change. Our current agricultural activities place a very heavy strain on our natural resources, in fact more so than any other activity. All in all, this makes agriculture one of the largest environmental threats of our time. In the meantime, the world population is expected to rise to over 9 billion people by 2050. The Food and Agricultural Organisation (FAO) of the United Nations estimates that global agricultural production will need to increase by 60% from 2007 levels by 2050. Meanwhile, even today not everyone is able to access or purchase the food they need.

Land use
According to Foley, researcher at the Institute on the Environment at the University of Minnesota, 40% of global land use is devoted to agriculture, the largest use of land by humans (Scientific American, 2011). The area used for growing crops is equivalent to the continent of South America, while our pastures amount to an area the size of Africa. We are already using the best land, apart from the rainforest and savannahs, which are important areas to conserve in terms of biodiversity and fighting climate change (FAO, 2013). However, even these are giving way to more arable land. 25% of the world´s tropical forests have been cleared, along with 50% of the savannahs. We grow crops to feed ourselves, but around 35% of the total is produced to feed the animals that we feed on, and another 5% to produce biofuels (which ironically are meant to halt climate change). So if we increase the area of cropland for biofuel production we more or less decrease the area for food production.

Modern agriculture
Today’s prevailing system for growing crops and livestock is called modern, a.k.a. commercial, or industrial agriculture. Historically this system is characterised by large scale farming by few and large corporations, a heavy dependency on fossil fuels, the use of fertilisers and pesticides to enhance production, and the cultivation of single crop types on large areas of land for many years (a method also known as monoculture). Scientists such as Miguel Altieri, professor at the University of California, Berkeley, are of the opinion that these systems are not efficient, cause environmental damage, and will be the first to collapse under the effects of climate change . The use of fertilisers and pesticides can also lead to health problems. Monoculture is good for business, but not that good for the land, biodiversity, or food security. Monoculture as opposed to polyculture (variety of crop rotation) deprives the earth of the nutrients it needs, leading to more use of chemicals or simply expanding the cultivated land area. In addition, mono cultured crops are more prone to being destroyed by diseases. According to Altieri, the environmental and health costs related to modern agriculture in the USA alone amount to US$4 billion per year (video).

Water use and pollution
In a context of increasing water scarcity, we are using vast amounts of water for irrigation, an estimated 70% of our fresh water use. As a result, the yield of rivers and aquifers from which we take our water is declining, in some cases even drying up completely. The use of fertilisers and pesticides has led to widespread water pollution and degradation. Fertilisers and pesticides are the biggest driver of biodiversity loss and can be found in nearly every ecosystem, having doubled since 1960 (Scientific American, 2011).

Food security and efficiency
Another problem lies in efficiency. According to the Commission on Sustainable Agriculture and Climate Change , of the seven billion people on this planet today, more than one billion are going hungry, another billion lack vitamins and minerals that are essential for good health, while another 1.4 billion are over eating (of which a third are obese). Global riots in 2008 and 2011 were not sparked by a lack of food, but because people could not afford a balanced diet due to rising prices. Others do not have access to food.

On top of that we waste no less than one third of all the food we produce (Commission on Sustainable Agriculture and Climate Change; 2012). Restaurants throw away fresh food that has not been sold on a daily basis. People are led by the (conservative) expiry dates on products and get rid of food that’s still edible. And perhaps most remarkably, supermarkets reject food on the basis of colour, shape, and size. To raise awareness, the United Nations hosted a dinner last February for government ministers and officials, serving them blemished fruit and vegetables rejected by European supermarkets to highlight how perfectly edible food is senselessly wasted. Also a large proportion of food is wasted at farm level due to lack of good storage and infrastructure facilities. In some African countries the infrastructure is not adequate to distribute oversupplies from the green regions to the dry regions where famine exist.

Food diets
There is a correlation between increases in purchasing power and the increase in meat consumption, as people move out of lower income classes. As the world population is growing so is the average GDP in developing countries. Already around 35% of the agricultural produce is used to feed animals, which, as demand for meat grows, will require more land both for grazing and to produce feed. This growing number of animals also contribute significantly to climate change (according to FAO the livestock sector contributes to 18% of the global greenhouse gas (GHG) emissions; FAO, 2013). Food diets are also becoming less diverse as food supply expands through large modern farms focused on monoculture, sending their produce to a small number of large food processors that supply it all over the world through, again, a small number of large retail chains. According to the FAO, most people in the global North depend for their food on only about 12 species of plants and 5 species of animals, whereas rice, wheat and corn make up a staggering 60% of humans’ vegetable intake (FAO, 2004). As a consequence of this concentration in our diet, we have already lost 75% of our agro-biodiversity just in the last century. People’s food choice is declining, and so is the quality of their food.

Climate change
Agriculture is one of the major contributors to climate change. The Intergovernmental Panel on Climate Change (IPCC) estimates that agriculture causes 30% of GHG emissions, making it the single largest anthropogenic source of global warming. These figures include emissions from crop and livestock production, deforestation, and associated land-use changes. The resulting global warming can significantly affect human society, and ironically, the agricultural production system that is helping to cause it.

Food sovereignty
Thought that was all complex enough? Behold the issue of food sovereignty. As discussed earlier, at present there are over a billion people classified as chronically undernourished. According to the FAO this is not because of food shortages, but rather a combined effect of the global economic crisis and continuing high food prices (FAO briefing, June 2009). The Via Campesina movement , represented by around 200 million small-scale farmers around the world, believes the solution is not just a matter of food security, i.e. producing enough food for everyone. This social movement coined the term food sovereignty to promote the goal of an alternative food system that not only produces enough food for everyone but is also socially just and ecologically sound while prioritising local food production and consumption. It argues individuals and peoples should be allowed to make decisions about the local and global food systems, products, and related policies, rather than leaving this to a handful of multinational corporations, powerful governments and supranational market institutions, like the WTO and OCDE, who the proponents of food sovereignty believe now control the world´s food prices and food chain, and ultimately are the cause of the problem.

Eric Holt-Giménez of the NGO Food First argues that the current system will sustain hunger rather than solve it (video). According to Holt-Giménez multinationals and organisations like the WTO sustain high food prices while expanding monoculture practises in developing countries, gradually pushing small-scale peasants who practise sustainable agriculture out of the market and off their land. There are 2.5 billion smallholders around the world of which most practise subsistence agriculture, and they are still producing half of the world’s food. If the trend continues, small-scale agriculture will ultimately disappear, and with it agro-biodiversity. Moreover, rather than feeding themselves, these people will need to buy food under conditions of high and rising prices, potentially increasing malnutrition and hunger levels.

Holt-Giménez argues that the Structural Adjustment Policies of the 1980s and 1990s (placing conditions on developing countries for receiving new loans from the IMF or World Bank) prevented the global South from protecting their own markets. The subsequent free-trade agreements of the WTO destroyed the capacity of the countries in the South to feed themselves. While developing countries had a joint trade surplus of $1 billion a year in the 1970’s, they now import for $11 billion annually, and many are dependent on food aid. One striking example is that of Haiti, where the local rice producers could no longer compete with international markets, forcing the peasants to the city and the country to import 80% of its rice. By 2008, the price of rice tripled and many Haitians could not afford it anymore. 80% now live in poverty.

The billion dollar question
As Foley puts it, agriculture is the single most powerful force unleashed on this planet since the ice age. Yet at the same time we depend on it for our survival and it is a major contributor to our economy (Food and related agricultural produce is a bigger business than even energy, bringing in around US$7.5 trillion in annual sales; ETC Group, 2011), which is why the topic is politically sensitive and under-addressed. So, considering these great challenges how are we going to feed 9 billion people in 2050?

read about it in part 2: Options for sustainably feeding over 9 billion people in 2050